When faced with a new challenge, I often reflect back on a movie I enjoyed starring Matt Damon — We Bought a Zoo. My favorite scene involved a brief dialogue between Matt and his estranged teenage son. Matt was trying to make a point and to encourage his boy to reach out to a cute, young girl he befriended and made this comment: “Sometimes all you need is 20 seconds of insane courage — 20 seconds of embarrassing bravery and I promise you something great will come of it.”

I have shared these words with many of my life coaching clients when they were hesitant to push past the hurdle of fear in pursuit of their dreams or goals. I have also heard wonderful testimonies of those who took the risk, and in “Twenty seconds of insane courage” experienced a destiny pursuit breakthrough.

What is holding YOU back today? If your dream is a “snapshot” of a more preferable future waiting for you, do you often find yourself stalling in moving toward it?

Maybe you’ve heard the story of training baby elephants. When they are still small, a strong rope is tied around their necks and attached to a secure pole in the ground. The baby elephant naturally tries to walk away and is stopped by the rope. They pull and push and twist and turn and eventually figure out that they just aren’t strong enough to break free of their shackles, so they stop resisting and just stay where they are.

The same thing happens over and over until eventually, when the rope is put over their heads, they no longer pull and push and try to break free because they know it is futile. That is why in captivity you can walk by a circus and see giant elephants standing passively with a rope tied around their necks that isn’t attached to anything at all.

The elephant becomes so accustomed to being held back by the rope, conditioned by their pain, that merely the rope itself keeps the animal in check. If only they knew how powerful they really are. If only they realized that by the time they have grown up, even a rope “secured” to a pole can no longer contain them. Then they would know what true freedom is. But they don’t.

In our destiny pursuit, there are numerous factors that can disrupt our journey, but they fall into two general categories: external and internal.

The external factors are the detours and difficulties that exist in the world around us. The internal factors, on the other hand, are the inner fears, wounds and weaknesses that cause us to be vulnerable to the enemy’s attacks.

These are the things Jesus is referring to when He says, “I will no longer talk much with you, for the ruler of this world is coming, and he has nothing in Me”(John 14: 30). Here, Jesus is saying two things: The enemy wanted to trip Him up, but he had no access points in Jesus’ life. He carried no FEAR in His heart.

Do you find it difficult to take risks in life — especially the kind that grow out of immediate emotion and involve vulnerability? We often find it difficult to suspend thought and take a chance. Like me, maybe you think things through too much, lose spontaneity and send possibilities into a black hole of obscurity or unknown space.

Is FEAR, False Evidence Appearing Real that paralyzes you in your tracks, or do you Face Everything And Rejoice because you have just targeted your next breakthrough?

I believe some of the greatest moments of our lives begin with just 20 seconds of insane courage. In that amount of time you can change your life, the lives of those around you, and possibly the world.

Miracles happen when you move forward, when we move out to meet them. We must learn to trust, to move in faith, and to discover divine favor. Moses didn’t need the miracle of parting the Red Sea until he was at the sea. With the enemy in hot pursuit and hemmed in by mountains, He needed 20 Seconds of Insane Courage to split open the Red Sea!

Consider the Man with withered hand. While standing in a crowd of gawkers, Jesus commanded him to stretch out his lame limb before him. Risking shame and embarrassment, all he needed was 20 seconds of Insane Courage!

What story will YOU be telling because you took the risk? 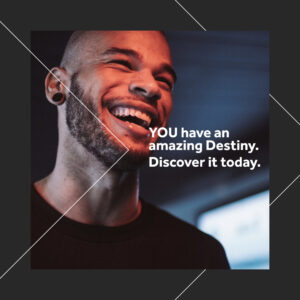